published in The Guardian, 31 December 2014
by Ben Doherty 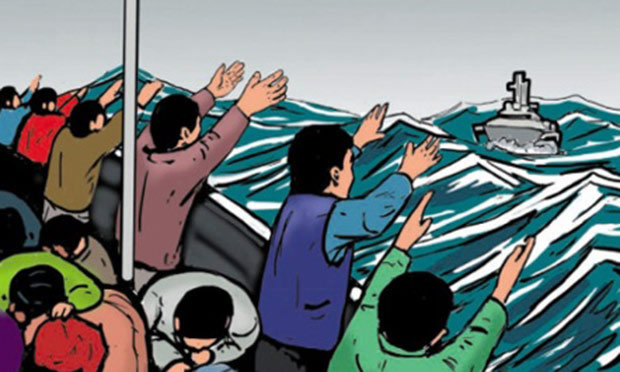 'Have the boats stopped reaching Australia?’ is the wrong question to ask. A better one by which to judge the success of its policies is this: are more people safer? Or fewer?'

The boats have not stopped. They have stopped reaching Australia but people are still drowning in seas in our region and across the world.

More than 350,000 asylum seekers boarded boats in 2014, the UN has found, leaving their homeland to seek protection somewhere else. Of those, 54,000 people boarded a boat in south-east Asia – Australia’s “neighbourhood”, in the words of the foreign minister.

At least 540 people died on boat journeys in that neighbourhood – starved, dehydrated or beaten to a death by a crew member and thrown overboard – or drowned when their unseaworthy vessel sank.

The great majority of those travelling in Australia’s region were Rohingya, a persecuted ethnic minority from Burma, who are brutalised by their own government, denied any rights to citizenship, to education, banned from having more than two children and from work in certain industries. Regularly, Rohingya villages are torched and their occupants forced into remote tarpaulin camps, where malnutrition and disease are rife.

Australia has signed an agreement with Burma with the aim of “boosting Myanmar’s immigration and border control” – essentially to prevent Rohingya from leaving.

In 2014 Australia stopped 441 asylum seekers in 10 vessels, the UN says, forcing them back to the countries they last departed.

The government regards these figures as evidence its policies are working. Thanks to boat turnbacks, offshore processing and regional resettlement, the argument goes, boats are no longer able to reach Australia. The people smugglers no longer have a product to sell: the “sugar is off the table”.

But that view fails to look over the horizon. It ignores – because Australia knows they are there – all the unseaworthy boats, and their desperate passengers, still looking for a safe port to land or dying in the seas to our north.

Even allowing (almost certainly over-generously) that several times that figure of 441 were deterred from trying to come to Australia, this country’s boat arrivals remain a tiny fraction of the world’s figure.

The number of people in our region still boarding boats bound for somewhere else is demonstration of the irrelevancy of the “stopping the boats” shibboleth. It is not a statement of policy, it is a tool of political rhetoric.

“Have the boats stopped reaching Australia?” is the wrong question to ask. A better question by which to judge the success of Australia’s asylum policies is this: are more people safer? Or fewer?

Has the sum of protection for people who need it – against sectarian violence, against ethnic discrimination or political oppression, against arbitrary detention in a transit or destination country – increased as a result of Australian policies?

The answer is no. There is less protection in the world for people who need it as a result of Australia’s policies.

Australia voluntarily ratified (in fact helped draft) the UN refugee convention. It willingly accepted the treaty’s obligation to offer protection to those who need it. But Australia’s policies now consistently place it in breach of that convention.

In announcing the Burma partnership, the then immigration minister, Scott Morrison, proclaimed: “Assisting our regional partners in building stronger, more effective borders is a priority of the Coalition government.”

But Australia is neglecting this obligation. Australia’s regional neighbours, its “partners” in addressing the asylum issue, are more overwhelmed than ever.

Malaysia has 41,000 registered “persons of concern” and thousands more unknown. Australia and Indonesia are locked in a long-running spat over boat towbacks and Australia has announced it will not resettle any more refugees from Indonesia.

It is, instead, looking to move refugees with claims for protection in Australia to third countries: Papua New Guinea, Nauru and Cambodia. Australia’s concern, it seems, ends at the edge of its territorial waters.

Two year-end speeches have highlighted the growing divergence between Australia and the rest of the world on the issue of asylum.

In Geneva, the UN high commissioner for refugees, António Guterres, urged countries to work more cooperatively to address the issue of irregular migration. He said dealing with the number of displaced people could never be as simple as stopping boats and shutting borders.

“Focusing only on border control and deterrence will not solve the problem,” he said. “It is the duty of any government to ensure security and to manage immigration but these policies must be designed in a way that human lives do not end up becoming collateral damage … an exclusive focus on security and targeting criminal activity only risks making these journeys even more dangerous.”

Australia has a different attitude – a different world view – on asylum. In a speech barely reported (it was given the same day as the government’s temporary protection legislation was being debated by the Senate), the head of the immigration department, Michael Pezzullo, said border protection, along with military power and diplomacy, formed the “trinity of state power” essential to any country’s existence.

While recognising it was “beyond the capacity of any one country … to tackle the global problem of refugee flows and numbers”, he emphasised that Australia must, alone, “control our maritime approaches”.

“The ocean around us is the crown jewel of our border protection system, and we must do everything reasonable within law, resources and government policy to ensure that this remains the case.”

Given the long-running antagonism with Australia’s most significant neighbour over boat towbacks, the actions of his department reinforce this emphasis on the unilateral over the cooperative.

Pezzullo’s speech was largely a dissertation on the continued primacy of sovereignty even in an increasingly interconnected, globalised world. It also made broader allusion to the new secretary’s view of the role of immigration in Australia’s development, and the country’s future population. He suggested Australia had enough people.

“When we transition from our current state to the new department next year, and commence on the path of the next phase of our journey, we should take a moment to reflect on what has been achieved since 1945. I contend that we will be able to declare the original mission of 1945 – to build the population base – to have been accomplished.”

It is a significant departure from the tone of his long-serving predecessor, Andrew Metcalfe, who urged a continued drive to populate Australia. “Our job as a department is to help build our modern Australian nation ... we have been extremely well-served by our migration programs,” he said. “Economically, our migration program has been, and continues to be, a backbone to many of our industries. People migrate to succeed, not to fail.”

Ordered migration and seeking asylum are separate issues, and should not be conflated, but Australia cannot fail to recognise more people are moving now than at almost any time in history. There are more displaced people in the world – 51.2 million – than at any time since the second world war: continued conflict, discordant economic opportunities, climate change – all will force more people to move, and more often.

As the world urges closer cooperation on the issue of mass and irregular migrations, Australia grows ever more isolationist. Moving the problem over the horizon is not the same as addressing it. The boats have not stopped.