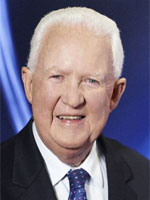 The Hon. Alastair Nicholson was an Australian judge for 22 years during which time he served as a Justice of the Supreme Court of Victoria, a Justice of the Federal Court of Australia and for 16 years, as Chief Justice of the Family Court of Australia. Since 2003 he has been an Honorary Professorial Fellow of the University of Melbourne, currently attached to the Faculty of Law. He has written and spoken extensively on issues relating to human rights and the rights of children and youth at many Australian and international conferences. He has been heavily involved in the planning and development of child justice programs in Cambodia and Vietnam and in urging a new and enlightened approach to issues associated with Indigenous people in Australia. In particular he has joined with the former Prime Minister, the Hon Malcolm Fraser AC in criticising regressive Australian Government policies towards Aboriginal people in the Northern Territory. He is currently acting as a consultant to the Queensland Government on the issue of the legal recognition of traditional adoption amongst Torres Strait Islanders. Since 2003 he has chaired the National Centre against Bullying of children in Australia and has spoken and written on the law relating to bullying.