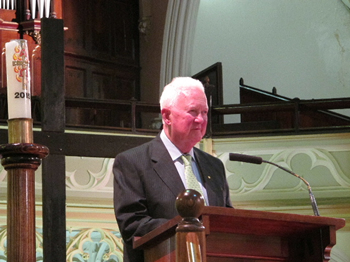 I am conscious of the brilliant eulogy to Michele delivered by Jeff McMullen at the service to commemorate her life in Sydney and the touching contribution of Pia Pagotto from ‘concerned Australians’ at this event and will not attempt to emulate them here.

I thought today I would just say a few words about my relationship with Michele and her wonderful ‘concerned Australians.

I start with a confession that I was something of a latecomer to Aboriginal and Torres Strait Islander issues before my appointment as Chief Justice of the Family Court of Australia. Because of the significance of children to the work of the Family Court and my concern that it was not reaching out to the Indigenous people of Australia I took a number of steps to try to correct that situation.

This is not the place to discuss those measures but that involvement did teach me much about the remarkable qualities of the Aboriginal and Torres Strait Islander people and also to form a better appreciation as to how they have been shamefully neglected and mistreated.

To me that neglect and mistreatment culminated in the Howard Government’s 2007 intervention, which was an entirely spurious exercise based upon false premises, which effectively shattered the morale and lifestyle of the Aboriginal people of the NT.

The election of the Rudd government seemed to me and many others to usher in a new dawn, particularly having regard to PM Rudd’s well-crafted and significant apology delivered at Parliament House.

Unfortunately those expectations were soon dispelled, for me by Michele. I was approached by Michele in 2009 to assist her as a result of a suggestion to her from my old friend and colleague, Judge John Hassett. She wanted me to examine so-called consultations carried out in the NT between June and August 2009 at the instance of the Rudd Government and in particular the then Minister for Aboriginal Affairs, Jenny Macklin. The purpose of them was to gain Aboriginal support for the continuation of a number of quite objectionable features of the Intervention. This they failed to do. I quickly became horrified by the shamefully inadequate and insulting nature of those consultations. I then worked further with Michele and others on the issue and that in turn led to the production of the Report, Will they be heard? Co-authored by Professor Larissa Behrendt, Alison Vivian, Nicole Watson, Michele and me. That report was launched by the late Malcolm Fraser, former Prime Minister of Australia, in November 2009 and provided a withering condemnation of what the Government had done.

A response to the ongoing Adam Goodes booing controversy 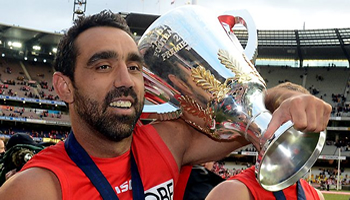 Bullying can come in various forms and for different reasons. Classically it is defined as the singling out and denigration of an individual or group by a more powerful group on a repetitive basis.

The treatment of Adam Goodes by large portions of football crowds in this fashion fits that definition perfectly. He is one individual subject to constant denigration whenever he plays by persons whose anonymity provided by the crowd enables them to get away with this cowardly behaviour.

In the professional sporting arena, the cultural impact of bullying multiplies tenfold due to the number of people involved and sets an appalling example to young people and particularly young children exposed to it.

I understand that occasional booing is common place in sport and in certain circumstances allows fans to healthily express their views.

My concern is when the booing is unrelated to what has happened at the particular sporting event in question and is inspired by antipathy to the person in question and continues every time he plays.

Adam Goodes has been and still is an important role model for tens of thousands of Australians, both as a sportsman and an Australian citizen.

His elite athleticism and skill have helped him thrive at the sport’s highest level winning two Brownlow Medals and two Premierships. In his role as 2014 Australian of the Year, he has worked with various communities, setting an important example for people, both young and old, to strive for a more united and pluralist country.

Clearly the boos are having a serious impact on Adam’s wellbeing. Yes he is a professional athlete and yes he is a celebrity, but what the booers are quickly forgetting, is that he is a human being.

The unedifying spectacle of singling out this one player sends out an ugly message to the public, which suggests it’s acceptable to single out and vilify one player on a repetitive basis. It is not. It actually undoes all the fantastic work Adam has done in our community and discredits the great game of Australian Rules football.

For him to retire from the sport prematurely as a result of this would be unacceptable. This behaviour needs to stop now.

[Published on the National Centre Against Bullying website, 30 July 2015] 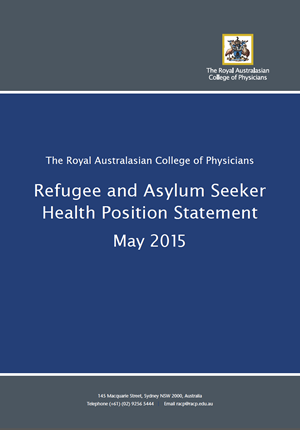 The passing of the Border Protection Act by the Australian Parliament was vigorously opposed by all of Australia’s key medical groups. Doctors and other health workers have taken to the streets to protest about being threatened with 2 years imprisonment if they report abuse affecting patients in their care in any of Australia’s offshore asylum seeker detention facilities.

CRI draws the attention of readers to a significant and clinically startling document, the Royal Australasian College of Physicians Refugee and Asylum Seeker Health Position Statement, May 2015. The RACP represents all consultant physicians and paediatricians in Australia and New Zealand.

Malcolm Fraser AC, former Prime Minister of Australia, was a staunch defender of the rights of refugees and asylum seekers. This speech was given at the Royal Children’s Hospital Melbourne on June 18th 2014 in a special symposium to mark Refugee Week. Other speakers in the symposium were The Hon Alastair Nicholson AO RFD QC, The Hon Frank Vincent AO QC and Dr Georgia Paxton, Head of the Refugee Health Clinic at RCH Melbourne. 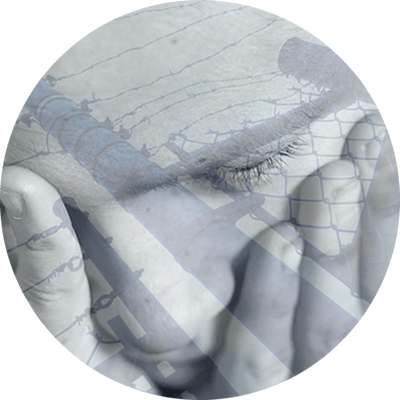 GETUP Kids Out Campaign and Call for Social Media Action 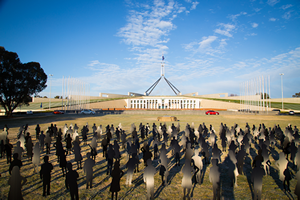 On Thursday (4 June 2015) GETUP delivering the petition straight to Parliament House calling for the immediate release of all children and their families from Australian-run detention centres. In addition to delivering the petition, 231 children's silhouettes were placed along the lawn, as well as the large block letters spelling 'KIDS OUT'.

The petition was supported by a range of concerned NGOs.

Because not everyone could be in Canberra for the delivery of the petition, GETUP, with the support of agencies such as CRI, would like to encourage as many Australians as possible to also call for the release of the children held in detention. Concerned Australians are asked to participate in a call for social media action. 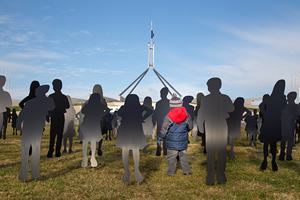 You can participate in the social media action by:

"When I was in fifth grade, my dad surprised me with a puppy, whom I named Sharna. We were best friends, I remember as a kid I felt like I could share anything with her.

But today, there are 231 children who are currently being denied the opportunity to make memories like these for themselves. They are locked in Australian-run detention centres by our government.

All children should be given a chance to enjoy their childhood, that's why I'm calling for our government to get #kidsout today."

Don't forget to encourage your friends and family to take part too!

See more at GETUP: Solidarity Action for Kids Out!